TADS has two kinds of tools for authors: an integrated, all-in-one graphical environment, or a set of command-line tools that you operate from your OS command shell.

(Regardless of which operating system you use to write games with TADS, the finished product will run on any system where there's a TADS interpreter available. Mac OS users will be able to run games you write on Windows, and vice versa.) 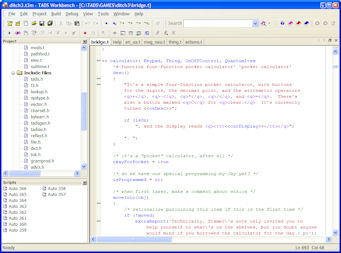 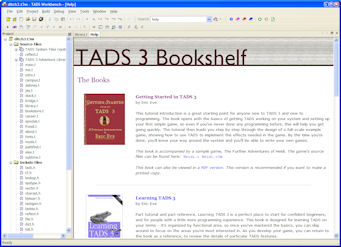 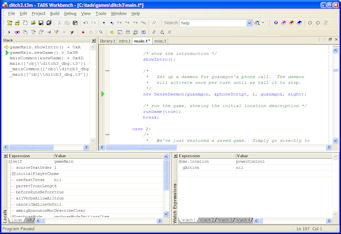 The TADS integrated development environment on Windows is called Workbench. Workbench brings together everything you need to write TADS games in a single application. It lets you edit, compile, run, and debug your game within a unified environment, without having to switch to any other applications.

On all platforms, TADS can be used as a set of command-line tools that you run from your system command shell.

The primary command-line tool is the compiler, known as t3make. t3make is actually a combination dependency manager, compiler, and resource bundler. You can set up your build by creating a project file - this is a text file that lists the source files that make up your program, the TADS libraries you wish to include, and the multimedia resource files (JPEG images and so on), and specifies the build options (macros, directory search paths, etc). The whole build is specified by this one project file; you submit it to t3make, and t3make does the rest. t3make figures out which source files need to be rebuilt, compiles the necessary files, bundles in the resource files, and generates the byte-code game file that you can run with the TADS interpreter.

t3make compiles each source file in your project separately. You can divide your game among several source files - by geographical region in your game world, for example, or with large objects such as actors in their own separate files. When you compile, t3make only rebuilds the files you've changed since the last build. This is a great convenience when you're actively building a new portion of your game, since only the files you're actively working on need to be recompiled each time you test, speeding up the compilation step.