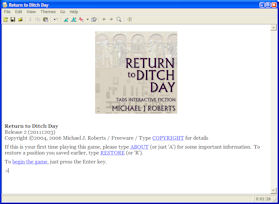 The game Return to Ditch Day running on the Windows interpreter, which supports graphics and other multimedia features 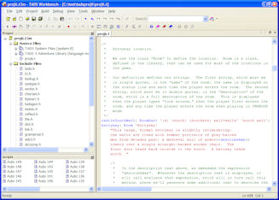 TADS Workbench, the integrated TADS authoring environment for Windows
Interactive Fiction grew out of the early text adventures, which were some of the very first computer games ever created. IF is still thriving through a community of enthusiasts who are actively creating new works.
Learn more about IF »
TADS is the programmer's power tool for IF authoring. It offers a robust and modern language that'll be instantly familiar to anyone who knows Javascript or C++, and a full-featured suite of development tools from text editing to debugging.
See a TADS overview »
Games written with TADS can include graphics, animations, sound effects, fancy text formatting, and other multimedia features, using versatile and familiar HTML syntax that neatly integrates graphics with text.
View screen shots »
TADS 3.1.3 now available

May 16, 2013: TADS 3.1.3 is now available. This is a small update, mostly to fix bugs. This builds on 3.1, a major upgrade released in December 2011. 3.1 has a huge list of new features, including Web capabilities that let you create games that run over the Internet. A game can use the network features to become a network server, client, or both. 3.1 also has a raft of enhancements to the TADS language that make it easier and faster to write games, and dynamic compilation technology that creates whole new possibilities for games and libraries.
See what's new in 3.1 »
Download the latest »